I have always dreamed of going to Ireland. It is where my ancestors came from in 1852 fleeing the potato famine.

I grew up hearing various versions of our origins, depending on my father’s mood for romanticizing what little he knew. The name James figured strongly in each generation of men born McKennirey and indeed my father’s second name was James. His first name was Maurice after his father, also with the second name James. And perhaps the family came from Limerick….or not. My father was unclear!

However, it was my younger sister who eventually pulled together the various threads of what we knew of the family that immigrated to Canada and settled in the Ottawa Valley. The family who are still there in Ontario had done some research and we have a handful of facts that started in earnest on this side of the ocean but showed few details on the Irish side.

We have Canadian census documents dating from 1852 onwards where the name was listed variously as McKennirey, McEneiry, McEnirey, and one document from my Great Uncle Mike dated 1816 in Ireland. That document was a letter of reference for one James McEneiry signed by a parish priest.

It was that document I followed in 2019, two hundred and three years after it was written, one hundred sixty nine years after our arrival in Canada, to the small town of Ardagh, Ireland.

Driving between Killarney and Limerick, Ardagh is a small detour off the main road, through the towns of Abbeyfeale and Newcastle West. It was with a thrill that I noted the name McEneiry on a storefront in Abbeyfeale.

The many villages and tiny towns we passed in Ireland were so lovely and quaint and well cared for, painted in pastel or bright colours, nestled behind rock walls and dotted with the ruins of old fortresses and castles.

Entering Ardagh we stopped to read the sign that boasted of the Ardagh Hoard, a significant archeological find that unearthed the Ardagh Chalice and other precious artifacts which reside in the national museum in Dublin. And of course Ardagh is famous for a Fenian uprising as well. As we drove through the town headed for the parish church I’d love to say that Ardagh was the usual pretty wee hamlet but that would not be true. 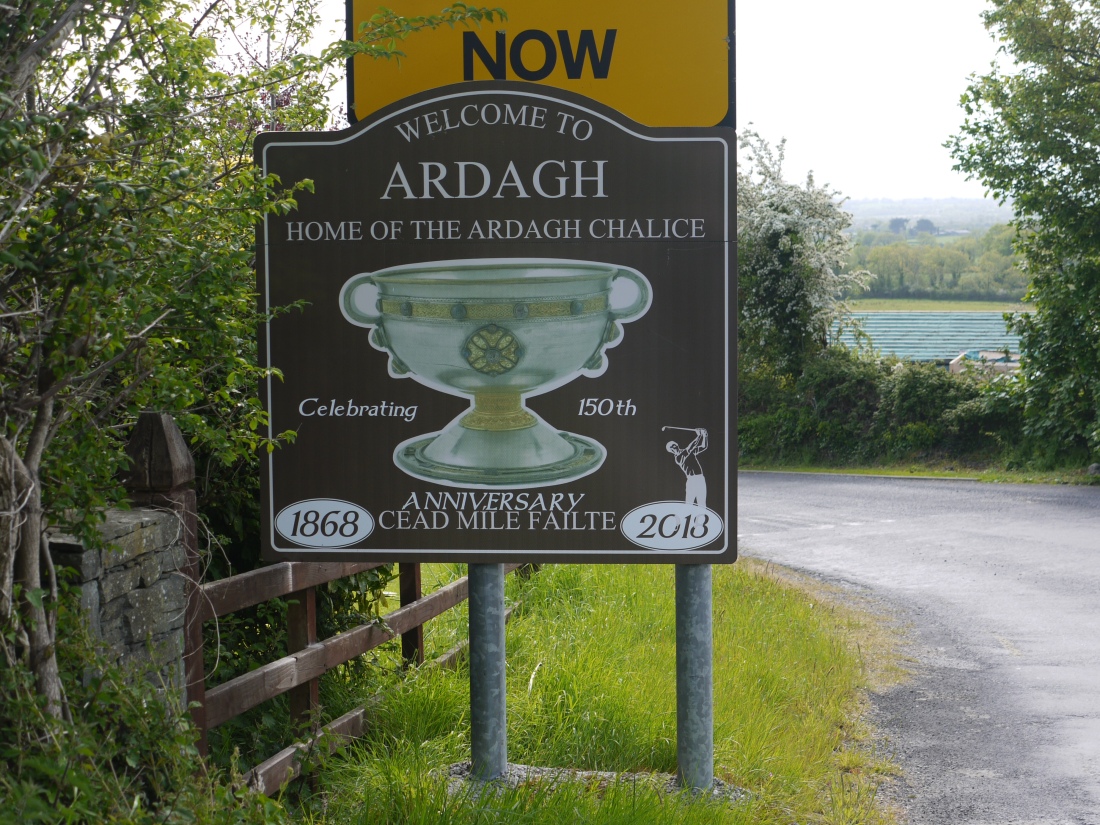 The town is merely a crossroads with a scattering of houses and empty buildings, a butcher shop and a church. This did not surprise me as it was frankly what I expected. The Church of St Molua had initially been built in 1814 but sadly it had been torn down and replaced with a modern church, not particularly noteworthy, which could have been anywhere in the world!

I wandered into the church looking for the priest and found him in his office with another elderly man. I said I was there looking for my ancestors and the old man replied in thick Irish “Yes, it’s a common enough ting!” I mentioned my family name but they both shook their heads, “No…there was no one around with dat name!” And the old fellow said “Dat family would likely come from o’er to Newcastle.” I showed them the document I had from 1816. The priest shook his head and said, well, he was new to the parish and didn’t know anything about it. And the old man said “You’ll want Mary Kury…she’s really a McMahon. She has all da records. She lives just down ta road” and he gestured back up towards the intersection. “Dere’ll be a row of four houses an’ Mary’s is da last one, it’s a very old one.”

Then I asked “Can I look in the cemetery behind the church?” And the old fellow said “None of your people are in dere! I know ivery gravestone!” I believed him.

I wandered back up the street, taking pictures and generally trying to get a sense of the place, searching for some feeling of home coming. But it eluded me. I crossed through the intersection and began to follow the narrow road looking for four houses in a row with the last one being old. As most of the buildings in Ireland are remarkably old, I knew this description was a relative thing. Past a couple of sheep fields and around a bend, I finally found four houses and walked up to the fourth one. I knocked on the door but to my great disappointment there was no answer.

I returned the way I had come, some distance from the village center now, and noticed a man pulling into the house two doors down in his car. I waited at the foot of the drive and eventually caught his attention and walked up to him. I asked if Mary Kury lived two doors down. He shook his head and said in a very thick Irish accent so I had to listen very closely, “No, no…Mary lives down ta road….on da way to Rathsceale. She’s really a McMahon ya know.” And he gave me an inquiring look and I said I’m looking for my family that went to Canada in 1852. And he said “Oh aye….dat’s a common ting!” I said our family name and he thought for a moment and then replied “I don’t know of dat name here but dere are some over to Newcastle. But ya might want to ask da butcher! He knows iv’ryone.” 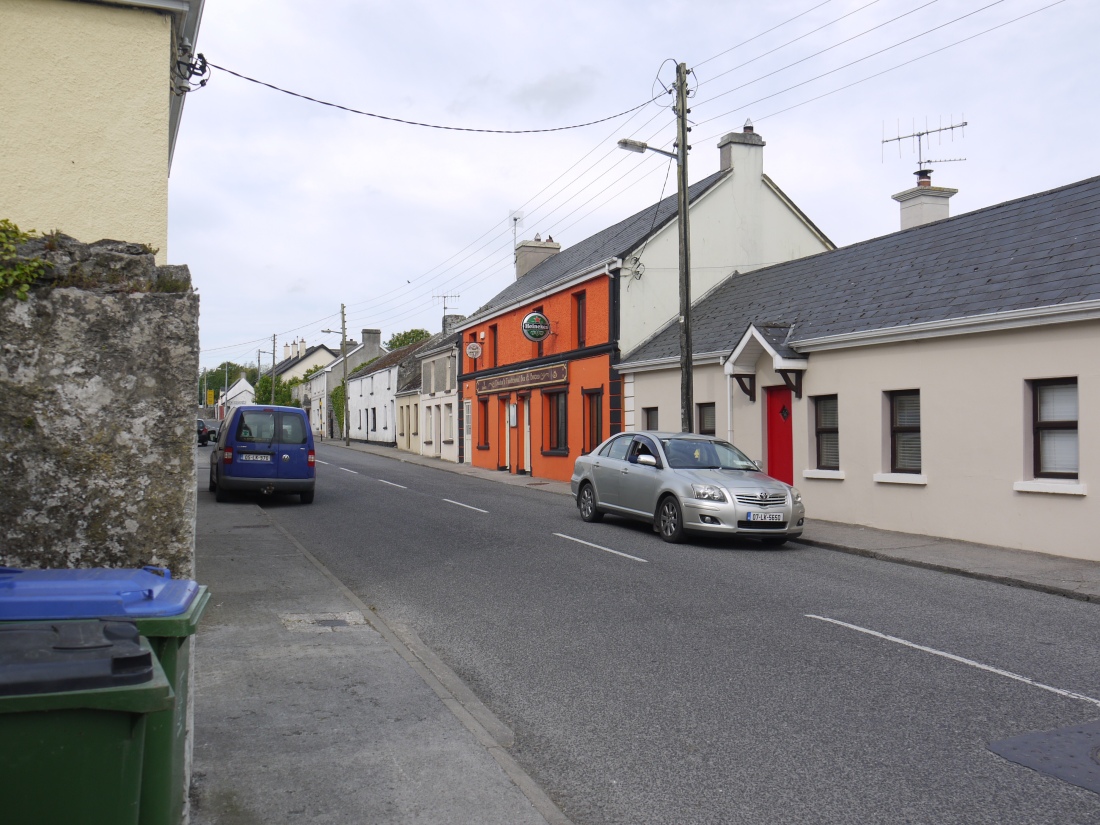 I thanked him and headed back the way I’d come. My travel companions caught up with me in the car and I explained what I’d found and that I needed to talk to the butcher. We drove down the street to the butcher’s and saw our first signs of real activity in the little village. There were people at the shop including a lovely old fellow in a tweedy suit with a tweed cap and a little dog in tow standing just outside. I asked him if he knew of any McEneiry’s and he replied in the negative, said something in Gaelic and gave me a beady stare. Inside the butcher shop everyone stopped talking and stared as I entered. I asked the butcher if he know of my family and he replied “No, but I’ve only been here fer twenty years.” The women all shook their heads and said no, no! So I asked after Mary Kury and the butcher stepped out of the shop and pointed down the street. “She’ll be da one to know” he said.

Back in the car we followed the road and sure enough there were four houses in a row, in the opposite direction I’d been given at the church, and the one at the end did perhaps look a bit older than the rest. I went to the door and knocked and the door was flung open by a tiny little women. “Are you Mary Kury?” Her face lit up with a big smile. “I am!” she said.

“I’m looking for family that immigrated to Canada.” I said and I showed her my document. “Of course!” she beamed at me. “My father gave that to your family man many years ago!”

I was astonished! She grabbed me by the hand and pulled me into her house. And waved at my companions to come in too.

Mary it turns out has written two books on local genealogy, one being a list of every grave in the area. And there in her first book was a picture of the document I have been following. With great enthusiasm, she began to pull out books and notes and bits of paper and scattered them across the table and we chattered away to each other for an hour. Her father had also been an historian and she was following in his footsteps.

On the subject of the many spellings of our name…and thousands of others from Ireland and elsewhere I’m sure…it was simple. The parish priests were often the only people who could read and write in the village and being English they spoke no Gaelic. They would write family names in their registry, or on a letter, the way they sounded. Equally, when my family arrived in Canada, the authorities did much the same simply spelling phonetically what they thought they heard.

And the document I had was famous not because of the family reference but because of the name of the priest who signed the letter, the first priest in the Church of St Molua built two years earlier in 1814.

Sadly, the letter of reference written for James McEneiry in 1816 was for him to immigrate to America. Therefore, although likely a relative, he was not the father of the James McEneiry/McKennirey who immigrated to Canada in 1852 with his wife and three children and other of his wife’s relatives. However, Mary felt certain the family name was still common enough in Newcastle West just down the road.

I thanked the lovely and spritely Mary Kury…who was really a McMahon…we took a picture together and I left feeling both happy for the encounter and mildly disappointed.

We were off to our next destination and stayed the night just outside Limerick. The next morning we were packing up the car to head off to the fishing village of Doolin when a woman from the hotel ran out to catch us.

“Did you meet with someone yesterday about your ancestors?” she asked. I replied that I had. “Well we have an email that was sent for you from the woman you met”. She handed me the email and it was from Mary Kury who had spent the rest of the day after we left searching for my family. She had details of others with the family name immigrating just after the First World War.

I stood on the steps of the hotel and my eyes welled up! The hotel staff patted me on the arm and seemed very understanding and excited. I was so touched that Mary had spent the time after we left looking further for some thread.

My trip did not allow for a separate and no doubt extensive search in Newcastle West but that of course will be a trip for another time! And hopefully a return visit to see the wonderful Mary Kury!

One thought on “Ardagh!”